Sara the Snowy Owl was looking all over for Miss Robin Gundel, but every place someone thought she was, she wasn't. The big snowy owl loved to check in with friends when she made her trip down to Saranac Lake. Celebrating Winter Carnival was fun, but not as much enjoyment as touching base with the many friendly folks of Saranac Lake.

"Maybe in another life," Gundel would laugh at the suggestion.

For the adults she would read murder mysteries. Sara had spent hours listening to Robin read Agatha Christie or Edgar Allen Poe. Another favorite was Robert Louis Stevenson who had wintered in the Baker Cottage in 1887-88. Robin would often read "The Lantern Bearers" since it had been written during that time.

And Robin was not found at home --- where she often was sewing. As a seamstress she was in demand and was able to earn a good living. The past few months were very profitable. At the end of November 1950, there was a big blow down and so many men had made extra money from harvesting the downed trees. All that work led to ripped britches, which Robin made good as new.

After not finding Robin, the big bird headed over to here temporary home --- the Ice Palace that was nearly complete. There was a new motel, The Adirondack Motel, near where they were building the Palace. More and more people were packing up the family and traveling the country. Saranac Lake was now a popular location for recreation. The Adirondack Motel would be a prime location for the visitors during carnival, as well as all the other seasons. The view of the lake was beautiful, and during Winter Carnival it was only a skip across the frozen lake to the Palace made of ice.

Robin Gundel was no where to be found, until she was. There holding a tray of coffee, right next to the burley ice workers, was the 85 year old Robin.

"Do you every sleep?" the snowy owl called out to her friend.

"Sleep? What!??! and let my fine feathered friend sleep in the cold, " laughed Robin.

Sara laughed too and she gave the coffee server a big feathered hug.

Turns out Robin had been serving warm beverages to the Palace Workers for most of the time. Of course much of Sara's searching had been filled with detours. Each place she looked for Robin, she found many of her old friends. Then there were the new friends she met. All of them wanted a big hug and to hear about what the woods looked like from up in the air.

"Spaghetti covered with snow," she would say. Anyone who trekked up Ampersand or Baker Mountain would agree.

One of Sara's new friend 13 year old Michelle Ettevir, who was clearly a fashion maven. In her red dress, she kind of resembled Minnie Mouse. Michelle was all giddy because the 1951 Winter Carnival featured two dances: The Barn Dance and The Snowball Dance. Michelle was planning on attending both, as was Sara. It has often been said that the Wintery Bird liked to shake her tail feathers.

A woman standing nest to Sara and Robin, butted into their conversation: "if we don't get a little help around here there might only be one dance."

When Sara asked why, the woman --- Nancy Strader --- said there are lots of people who want to dance, but it seems not so many of them want to decorate.

Sara looked to Robin and Robin responded with: "Don't look at me, I need to do some sewing for the Rotary --- they have a show this year, their first one."

"Really?" the snowy owl asked, "What are you sewing?

"It's a secret, but it also involves dancing," winked Robin and off she went with her tray of empty coffee cups.

Sara had to chuckle, this woman had a way with words and if she was having trouble finding volunteers.... then there was a problem.

Nancy explained that a lot people volunteered and were pulled in many directions during Winter Carnival, but on the other side, where quite a few people who did no volunteering.

"If you are interested, we are decorating tonight at 7 p.m." Nancy informed the big white bird.

"I guess I couldn't say, 'no' " and Sara promised to be there. And when three of the Palace Workers heard that Sara was going to be there, they offered to be there as well.

'Hmmm,' Sara thought, 'what a great way to see all you my friends.'

As Sara flew around Saranac Lake, she made sure everyone knew where she was going next, often to other volunteering opportunities. The best thing about it, when all her friends followed her to the different volunteering, she had a great chance to talk to them. In fact, so much talking went on, most of the helpers didn't even realize they were working, but were actually having fun.

When Sara was at Pisgah making sure the mountain would be ready for the Torchlight Skiing (she did some skiing just to 'test out' the slopes) she ran into the Queen, Natalie Bombard. Not only was Natalie one of the prettiest Queens, she also was the New York State Slalom, Downhill and Cross Country Champ. It was clear this was a very sports oriented Winter Carnival. Along with Natalie, Tom Fina, a great speed skater, was the King and the Carnival Honorary Guest was none other than Edmund Lamy another great speed skater from Saranac Lake.

Edmund had been featured in "Ripley's Believe it or Not" for his record barrel jumping. Not only was he lightning on ice, he was an all around athlete, the Jim Thorpe of Saranac Lake. He excelled in guideboat races, bowling, swimming, basketball and baseball. A professional baseball career was cut short in 1911, when he broke his collar bone.

Now there were volunteers galore in 1951, and all those volunteers felt it only seemed right to go to the events they had worked on. Nancy Strader got her helpers at the Barn Dance, Michelle Ettevir got to dance at two dances and Robin Gundel had the biggest laugh. Robin and all those at the Rotary Show laughed for weeks at the attire of the Rotary Dancers.

After the Rotary Show, the winter bird joked: "And I thought I had skinny legs."

It was clear the little 'Village by the River' would not be the great place it is without those helpers. 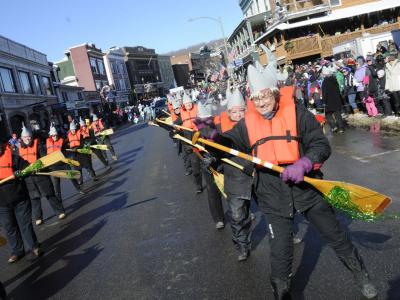