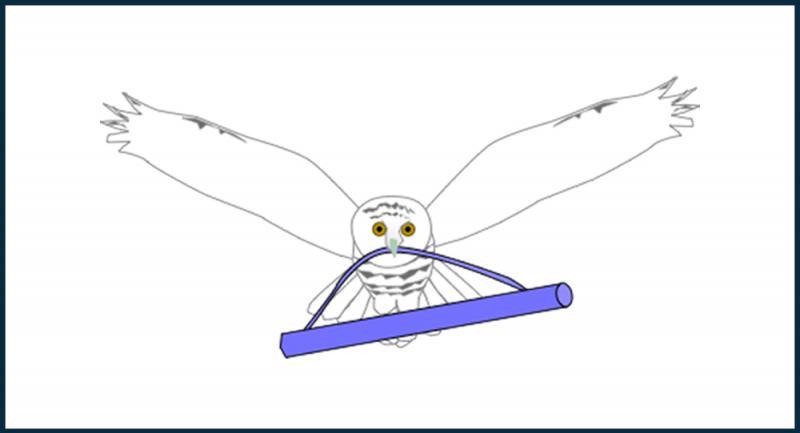 Sara swooped down and landed on the "T" in hotel, of the Hotel Saranac sign.
The big snowy owl scanned the village for friends. Several were putting the finishing touches on the Ice Palace, or 'home' as she referred to it. The Ice Palace Workers had included several conifers to give the place the back in the woods feel.
It was a brisk day on February 7. The temperature was 5°, not too bad for Sara, who loved the cold, but most all others would admit that was cold. The next day the Winter Carnival was going to start and the high predicted was 3°! Fortunately, by Sunday it was going to be in the 20's, but it would be cold on Parade Day.

The 1985 Carnival felt more local than ever since North Country Community College had picked Mary Beth Perras (a local girl) to be the princess, two years later her dad would be King. Matt Snyder of Paul Smiths College was the Prince. The king and queen would soon be picked. That event would be announced at the coronation on Friday.
From her perch she could hear the wind whistle... or maybe it was Howard Victor "Prof" Littell who was believed to be living in the Hotel Saranac, as a ghost. It made sense, in some ways, in that the grand hotel sat on the former site of the high school where Littell taught.

Then Sara heard some laughter, feminine laughter, and she knew it was a voice from the past, but was not a ghost. Coming out the front door was her artist friend Tomi ARThur. Everyone called her Tomi ART because she would sign her name 'Tomi ARThur.' Tomi had painted Sara's portrait a couple times.
When Sara swooped down from the hotel 'T' Tomi was talking to a couple from Ohio. It wasn't unusual for Tomi to be talking to someone ( she was one of the best marketers of art around) or that there were people in Saranac Lake from Ohio.
People had been coming from far and wide to see the palace of ice, which Sara called home. The Saranac Lake Winter Carnival was well known and now a regular event.

Since 1946, Saranac Lake has had a Carnival, Ice Palace and a regular visit from Sara every year. Prior to that, there were Winter Carnivals (and the company of Sara), but not always in consecutive years - - until after WWII.
Sara had been visiting the little curing village since 1898, when the residents began building her a palace to sleep in and protect her from the winds off Lake Flower. Of course, because of the many activities going on during the winter festival, she didn't sleep all that much. This was one of the main reasons why everyone planned trips to Saranac Lake in February--- seeing the parade and the Ice Palace, along with the many events, there didn't seem to be enough time in three days! Fortunately, weather permitting; the ice fortress was not taken down until March 1.

The building of the Palace by the IPW 101 was no light undertaking. In fact, the 1985 Palace weighed 1,440,000 pounds. That is a lot of cutting, lifting, sliding and slushing together of ice blocks. Not to mention a lot of water over the dam come spring and the big owl appreciated every bit of it. With such a centerpiece of the Ice Palace in place, it was no wonder the theme was "The Magic Kingdom,".

Tomi ART was talking to Marcia and Pat O'Connor from Ohio. Pat owned a record store in Toledo and Tomi thought he might be interested in selling some of her psychedelic art. They were a fun couple and Pat suggested some music Sara would enjoy, on the long winter nights when she returned up north. She would find the music a little edgy but great for shaking a tail feather and warming up.

The Hotel Saranac seemed to be a happening place because having lunch in the hotel's restaurant was Phil Gallos. Phil's book "Cure Cottages of Saranac Lake" (a culmination of nearly three years of research) was about to be published and Sara couldn't wait to read about all her friends that were in the book.
And speaking of books, Joyce Meagher, librarian of the Saranac Lake Free Library across the street, stepped out the door to give Sara a wave 'hello' and the Snowy Owl gave a feathery one right back. Everyone was in a festive mood and ready to celebrate winter.

It was a well-known fact, if you wanted to find someone during Carnival, you just needed to stand outside the grand hotel and you would run into them. It was fast becoming the official reunion facility for the Paul Smith's College Alumni... and all alumnus of Winter Carnival.

And of course, that is just what happened when Dr. Francis B. Trudeau, grandson of Dr. Edward L. Trudeau, walked by and Sara gave him a big feathery hug. Turns out Dr. Francis was going to be the grand marshal of the parade. And this was the year the good doctor was going to retire. He was interested in research as much as his grandfather and had created Trudeau Institute in 1964, and sparked a revival in research for the village by the river.

"Sara, good to see you," Dr. Trudeau said. "I need your help, to deliver a baby."
Somehow Dr. Francis has mistaken me for a stork, the owl thought.
Francis could tell that Sara was confused: "I don't mean 'a' baby, I mean 'my' baby."

This was even more confused, she knew that Gary Trudeau, cartoonist and creator of the Winter Carnival Buttons, was an adult and in his 3o's.
"I'm not making this clear." Dr. Trudeau said, then explained: "I left one of Ursula's paintings in the city.. .and because of the parade I won't have time to get it. I suppose I could find some currier, but I am sure you could deliver it faster."
Sara looked at her wing, at the watch she didn't wear, and smiled: "Sure, but will it be safe in the flight?"

Just then, Tomi who had been eavesdropping, offered to help. She had some cylinders that Sara could put the painting in and they even had a strap that the snowy owl could hold in her beak. After a quick bite to eat (and why not? the Boathouse bistro was right there in the Hotel with the best Ruebens around!!), Sara was off, flying over the beauty of the Adirondacks.

Sara returned just in time to see her friend Katee Fobare crowned as queen of Winter Carnival and to meet the new King: Clarence McCormick.

When she gave the painting to Dr. Francis at the coronation, he told her that she wasn't the first or the last person to bring art to Saranac Lake, but he was so glad she did it in style. He promised her a ride in the Grand Marshal Car. Sara declined, because she liked walking in the parade and giving all the children big hugs.

It is rumored that Artist Tim Fortune had come home for a visit and that he was sitting the Harrietstown Hall for the coronation. Fortune may or may not have heard Dr. Francis and Sara discussing art and its importance to the village... One thing for sure, a couple years later he was making a life and a 'small fortune' with his art in Saranac Lake. And it fit him like a 'T' on the Hotel Saranac sign. 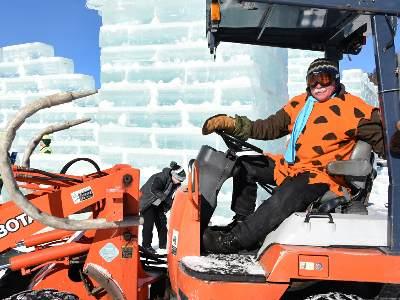