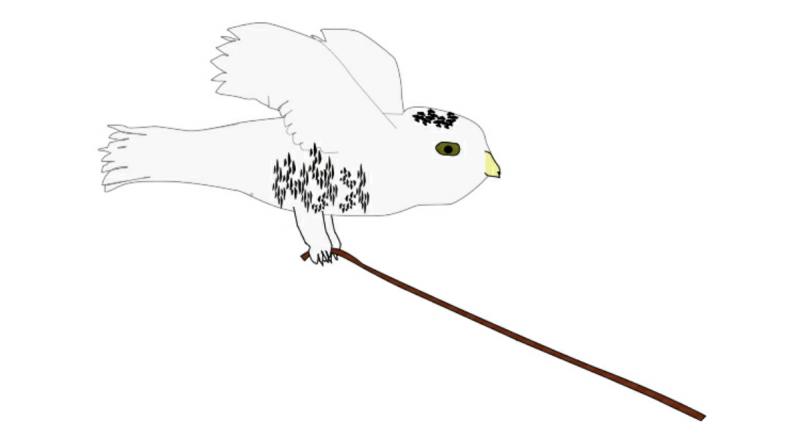 Emmanuel, or 'Manny' as he was known to most all in Saranac Lake, was walking down Main Street. He wasn't easy to pick out because in 1948 the Village by the River was bustling.

There was one thing that set him apart — a bugle under his arm. He was on the way to the Saranac Lake Free Library for an Adirondack Animal Welfare Society (AAWS), which Manny was the President. Not only was he the leader, but he had the honor of being the youngest (at age 17) president of a humane society in the United States.

To say Manny was invested in the safety of animals, was like saying sleds slide down Blood Hill. It would be impossible to stop the sleds or Manny. In fact, Manny started the AAWS at age 12. So it was no surprised Sara the Snowy Owl and Manny were very good friends. It was as if they spoke the same language.

Sara swooped down behind the busy teenager and let out a long: "Hoooooo."

He turned around with a smile as wide as Broadway, then gave Sara a fine, feathered friend hug. The young man was happy to see his Sara.

"I see you are on the A to B path to your meeting," Sara said.

"Not very creative," Manny laughed. "But when you are running late, you have to be logical."

Sara chuckled too. She had referenced one of Manny's favorite quotes by Albert Einstein: "Logic can get you from A to B. Creativity can get you everywhere."

Sara had never met Einstein, since he mainly visited during the summer. He spent much of the war in Saranac Lake and all the villagers knew Al, or at least knew of him. They often told stories about being lost on or capsizing his sailboat.

Manny told Sara he was on his way to an AAWS meeting and couldn't talk long. Plus there was no way the two of them could have a conversation on Main Street. Each knew too many people, they spent at least five minutes saying just hello to all the Villagers that walked past them.

Many wanted to talk to Sara, it had been a year since her last visit and everyone loved the Snowy Owl from up north. Almost as many were thanking Manny who took in local animals that had been mistreated. Most of their friends didn't want to talk, but even a minute or two with so many folks took a lot of time.

They would have to catch up later. He did ask for one favor, for Sara to fly over to his place and feed & water the dogs he had at his place. Being the president and founder of the AAWS also included the duty that when an animal was being mistreated by his or her owner to board them. Manny would sound his bugle and his team would rescue the animal. Until a new owner was found the AAWS President would be in charge of their care.

Off when Manny and Sara decided she would stop to say hello to Sparky Coleman before her flight to Manny's animal bed and breakfast. Sparky was always good for a joke or two, maybe 27. Sara wasn't the only one who stopped in, in the 15 minutes that she was there, she must have heard the 'blender' joke about eight times.

One thing for sure, Saranac Lake knew how to end one year and begin another, with a Winter Carnival! Carnival would start on December 31, with a wonderful New Year's bash and wouldn't end until January 9, 1949. The Village by the River had Sara's Ice Palace up and read. The Palace was a spectacle. People came from all over to see Sara temporary housing on Lake Flower.

Sara was almost knocked over by Sully Pellitieri and Lois Kelley, who were on their afternoon walk. The two were a couple of the remaining residents at Will Rogers Memorial Hospital (formerly National Vaudeville Artists' Home). Sara was impressed that they were walking from the hospital's location up on the former Spion Kop property. Or more that, after a hardy walk, they could get back up the hill to the Tudor-style building.

Bidding the two women goodbye Sara flapped her wings and was soon feeding and watering the dogs. Madyson, Jager, Edith and Reba were happy to see her and were yipping and barking. Even after getting fed and watered the dogs were wound up. It was clear that the dogs needed some exercise. Sara put a leash on Madyson and Jager. As soon as the door was open the dogs were off racing to smell everything that might have a sent. They were fast, but the big owl held tight with her talons.

Sara was like a kite behind the dogs as they ran through the woods. She spread her broad wings to slow the dogs, but they were taking her for a ride she would not soon forget. After those two were worn out, she took Reba and Edith for a walk, but for them, only one at a time.

Once the walks were over and Sara had caught her breath, Manny showed up.

"I see you noticed the dogs need someone to walk them," he pointed out. "Someone who can handle the pace.

"Yes and I might have a solution," Sara told the bugle boy.

Sara had great fun in '49, in spite of the fact that the skating races were canceled because of rain. She was able to recruit several friends to be in her Feathers and Fur Marching Brigade. Leading the way was Edith and Reba with Lois and Sully at the end of the leashes. And all of the AAWS following.

And Manny was laughing at the creativity that got the dogs past A and B, and into a parade.

Sara hopes you will consider visiting her friends at the Tri-Lakes Animal Shelter.

2018 Picture of The Day
Top Sponsors