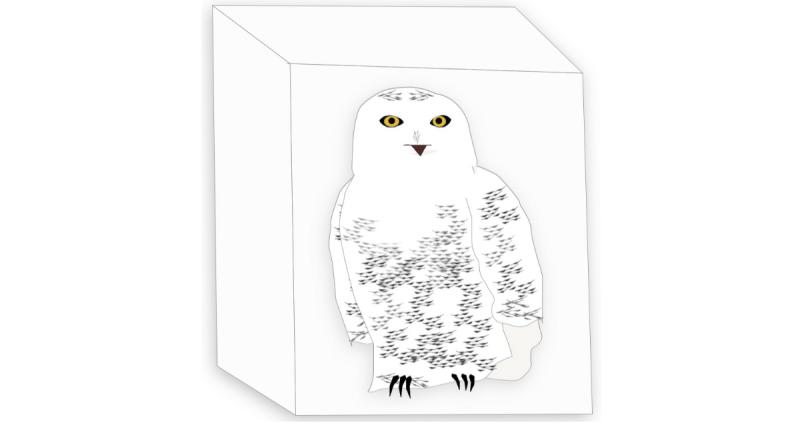 "But what?" said Sara, suppressing the desire to make a joke about tail feathers"

"But what if they tell each other?"

"Of course, they will tell each other. Husbands and Wives talk... well in a good marriage!"

"They certainly seem to be deserving."

The dialog went back and forth, then round and round. Like a pinwheel in a breeze.

That was the conversation Sara the Snowy Owl was listening to. Though technically she was not supposed to be there. It was a meeting of past Kings and Queens of Winter Carnival, to select the 1999 royalty, but the big white bird had her way of bending wings without ruffling feathers.

Sara couldn't be happier about the 1999 Winter Carnival, now that the Winter Festival ran a full week plus two days. And it needed to be that long --- there were so many events and activities that another weekend was almost mandatory.

Another weekend gave visitors a second chance because there wasn't any place to stay in the newly dubbed "All America City" if you didn't make reservations months in advance. That is how popular the Winter Carnival had become.

This was a great way for the big Snowy Owl to make new friends. Sara had always spent a week plus in the Village by the River. She would show up early and reconnect with the folks of Saranac Lake. The locals. Her home -- the Ice Palace was almost always ready ahead of time anyways. And if they knew she was coming, it would definitely be ready.

While the committee talked... Sara found it hard to not say anything.... but she was able to stay quiet -- for the most part. She was there, in theory, for moral support. She started to say something but took a sip of her ice water, which was now mostly ice.

Whenever she flew into town and settled at the Palace, word spread quickly amongst the locals who would say she had arrived at "Sara's Air B and B" ('B and B' standing for Bed and Base). People came from around the world to see the Ice Place.

When Carnival parade weekend rolled around, Sara was the Village ambassador, greeting all the visitors.

Now there were two Paul Smiths Woodsmen Exhibitions, with lumbering activities in Riverside Park. Of course, that wasn't the main thing people were talking about. There were two exciting new events The Arts Council of the Northern Adirondacks had a big concert with Skip Parson Riverboat Jazz Band at the Town Hall on the first/added weekend.

But Sara had a special interest in the mystery at the Hotel Saranac - "Ice Kapers." She heard it was about a missing trout. She loved trout and solving mysteries so she circled that event on her calendar. Best of all, after the play, the concert would still be going on.

She knew and loved the members of the play (Doug Fransen, Kristin Finn, Tim Dumas, Lisa Dumas, Jessica Deeb, Ann Fortune, Lynn DeWalt, Peter Wilson and Cheryl Stobeck); she had seen them in many of the Community Theatre Players productions. Now they were in a Gem*Boy Production play.

She was excited to meet up with the writer/director Arthur Montage again. She had nicknamed him: "The Creator" because she knew he had a writing career. Sara had met Art last year at the coronation and the fluffy owl was looking forward to reconnecting. It was Art's suggestion that they didn't need to add another day.. they needed another weekend. Visitors would be more willing to visit, when they didn't need to take time off for work.

The selection committee conversation revolved around common factors when it came to the Winter Carnival Royalty. One was: no one was supposed to know who would be King and Queen until it was announced during the coronation. In this case, the King and Queen would know each other --- intimately. Of course, very few Kings or Queens were strangers to anyone in Saranac Lake.

Most future royalty like past monarchy ... were so involved in the fiber of the small-town community that it was hard to imagine how they couldn't. Saranac Lake was like Bedford Falls in the movie "It's a Wonderful Life." (ironically a radio drama once presented by Gem*Boy Productions). It was hard to imagine what the Village would be like without certain people.

The big white bird heard one of the past Queens say: "Rome wasn't built in a day." And she had no clue what that meant

The Snowy Owl was out of water and patience.

"Ahem," Sara said, a bit louder than she wanted. She had intended to excuse herself to get more water, but when all eyes looked at her...she started.

"Does anyone remember what the theme is?" she asked

"And do you remember how the team went to lobby for us... and how these two were part of that team," The Snowy Owl went on, while everyone nodded. "They were bragging about all the community connections Saranac Lake has...and for good reason..

"And the team went into the conference room, with a bucket of ice," Sara then added, "Does anybody know the story of what happened next?"

When she asked her question she swung her wing and the ice that was left in her glass went flying onto the floor.. and the cubes continued to spin.

Jacques DeMattos cleared his throat and said: "We put ice cubes on all of the tables and said it was part of the Ice Palace. It was like a spell was cast!"

Everyone heard Jacques and they had heard the story many times. But their eyes were on the floor where the ice cube continued to spin, like a fable told by a wise ol' owl

The vote was unanimous. Robert and Patricia Brown were the 1999 Winter Carnival King and Queen.